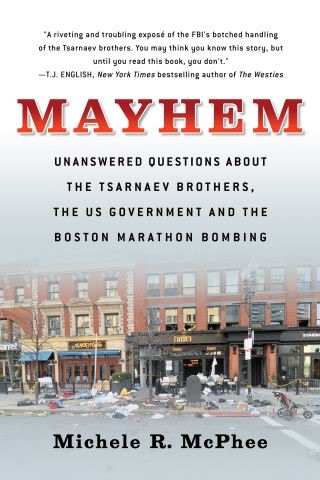 Unanswered Questions about the Tsarnaev Brothers, the US Government and the Boston Marathon Bombing

Mayhem goes a long way toward answering questions that still linger about the notorious Boston Marathon bombing, such as: Where were the bombs made? And what had been Tamerlan Tsarnaev's relationship to the FBI? This page-turning narrative casts a spotlight on the US Government's relationship with the older Tsarnaev brother as his younger brother, Dzhokhar, continues his efforts to have his death sentence commuted.

The federal government may be forced to confirm a longstanding relationship with Tamerlan and its decision to shield him from investigation for the Sept. 11, 2011 ISIS-style triple murder of three friends. As they infamously did with Whitey Bulger, federal agents appear to have protected Tamerlan because of his value as a paid informant. Mayhem is a substantially revised and updated first paperback edition of Michele R. McPhee's earlier book about the bombing, Maximum Harm.

Michele R. McPhee: Michele R. McPhee covered the Boston Marathon bombing as a reporter. She is the author of seven true crime books, a five-time Emmy-nominated producer in the ABC News Investigative Unit, a Pulitzer Prize-nominated newspaper columnist, an award-winning magazine writer, a television commentator, and was formerly the only female host of a Boston drive-time radio show. She was a writer on Season 1 of the Showtime series City On A Hill and is currently working on Season 2 as what The New York Times called the "Boston credibility consultant." She is developing her Newsweek cover story on the FBI informant who infiltrated MS-13 into the HBO scripted series The Beast, and into the book Operation Mean Streets. She lives in East Boston, Massachusetts and Echo Park, Los Angeles.

Devon Sorvari grew up in Massachusetts and New York City, doing theatre all across the country before landing in Los Angeles and discovering the wonderful world of audiobooks. Favorite credits include playing ‘Elaine Robinson’ in the First National Tour of The Graduate and 'Honor Huntzberger' on Gilmore Girls. She is a graduate of NYU’s Tisch School of the Arts. www.devonsorvari.com